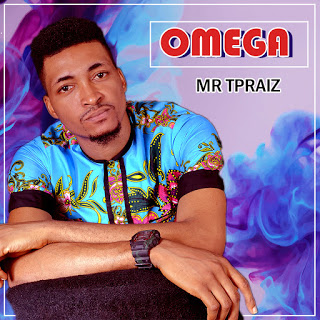 “OMEGA” by Mr Tpraiz, Produced by the very famous “Vc – Perez” Song Mixed & Mastered by GFlames.
The Song “Omega” Can be Best described as an Afro/Dance
Song with a Melodious Tune’s that will blow Your Mind. This song was
inspired by the Holy Spirit, to celebrate the Almighty God, who is The
Alpha & Omega (The Beginning & The End). It’s a dance Song that
will motivate Christians & Every music lovers to celebrate God,
thereby dancing away There sorrows, sickness, set back’s, Regrets, hates
& Welcoming in the blessings of God to fill there lives..
About Alenkhe Larry Titus :
“Alenkhe Larry Titus”
Also known as “Tpraiz” A.k.a “God’s very own” Also the Ceo & Founder
of Gzenter10ment,  Whose First Musical Album was Released october 2015,
Titled “The Invasion” and has been a blessing to many who have
Listened.
Mr Tpraiz has been a Gospel | Inspirational Singer for 9 Years now,
Formally Signed into Multi zone Records, Also a one time Mtn Project
fame 8 Participant, who has won several Musical Awards.
For More informations / Bookings, Kindly reach Mr Tpraiz on any of this social platforms Below :
DOWNLOAD HERE

Joyful Praise – ”Only You” (+Official Video) | Prod. by Doctors of Music