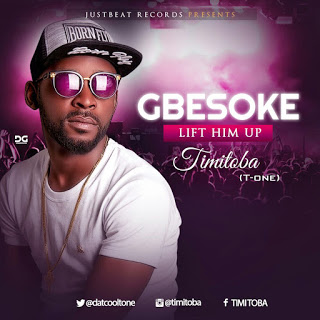 The Pman northern best producer, Timi Toba starts up the year with the release of his single “Gbesoke”.
“Gbesoke” which means lift him up, is a uniquely laced danceable song that stirs up the praise in you.
Download, Listen and have a reason to praise.
DOWNLOAD HERE
ABOUT ARTISTE
Meet Timi
Toba, the 2013 award winning “Best Northern Producer” who is well-known as
“T-One”. He is a passionate worshiper who started up his music ministry as far
back as his secondary school days in Daura, Katsina State. Timi is one of the
two children born to Mr and Mrs oloruntoba Usman. He hails from Oranre in
Yagba-East Local Government area of Kogi State. He marks his birthday every 3rd
of July. He has lived almost all of his life in the north.
This ‘gospel
missile’ owns a music studio called “Just Beat” which is based in Kano. To his
credit, he has an eight track album entitled “the Genesis”. He formed a gospel
music band called BWAN (Beyond Words and Notes) also known as “The Take-over
family” that has the best of vocalist and instrumentalist in Kano.
Timi sings
and plays the keyboard. He is also passionate to learn on a daily basis which
earned him a post as the assistant music director of the Treasured Life Choir
called “Treasured Voice”.  Mr. Timi is a
young and futuristic minister that is zealous and hungry to offer the best for
God.