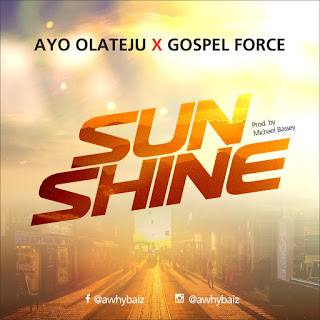 Gospel music singer Ayo Olateju is out with a new single titled “Sunshine”. The song, a fusion of Rock and Jazz is a declaration of a prophetic manifestation. It proclaims the promises of the Most High God as the Light of His own people, just like Isaiah 60:1-22 reveals.
“Sunshine”, written & composed by Ayo Olateju is also an encouragement to walk into our kingdom inheritance. It is a song that births spiritual illumination.
Ayo Olateju, also known as Awhybaiz, is a Bass Minstrel,a Sociologist and a Songwriter. He is the Assistant Music Director of the phenomenal Carpenterz Household; a Gospel music ministry under the leadership of music and word minister; Babz Carpenterz.
Awhybaiz has released 3 singles in the past including “Ojo Oni a Sanmi”, “Apala Fusion” and “Olorun Ni”. Awhybaiz’ songwriting Abilities cut across various genres of music with in-depth lyrical capacity.
“Sunshine” features Nigeria’s fast rising Rock band Gospel Force and it was produced by the prolific Michael Bassey.
DOWNLOAD HERE