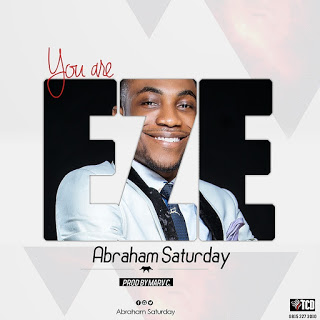 Nigerian Gospel artiste Abraham Saturday has released a new single titled ”You Are Eze”.
‘You Are Eze’ is a thanksgiving song to express gratitude to God in this season.
”This season is a season of thanksgiving for me, i am thanking God for all the things He has done for me, which i can’t say it all,  but choose to give Him this worship song, as an appreciation”. – Abraham Saturday
Lyrics
You are Eze the one who made away for me
You are Eze ikariril’heasinibu
You are Eze odighi’onyedikagi
You are Eze, you are Eze
Chorus
Imela oooh…imela oooooh….imela ooooh…
Eze’m ooooh.
Amanam ooooh, Amanam ooooh, Amanam oooooh
Eyen Abasi Amanam ooooh(x2)
(Sax line)
Bridge
You’re my Eze , you’re my Eze, you’re my Eze, you’re my Eze. ( x2)
DOWNLOAD

I Will Lift You High + Amazing Love – Sunnypraise Adoga