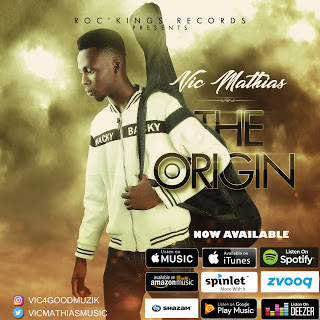 After much anticipation, Rising Star Vic Mathias has announced the release of his first music album titled “THE ORIGIN”.
The
Origin which means the starting point or the beginning of Vic’s music
career is an eleven tracks album talking about the sovereign power of
God and His mighty works.  You can get the song on itunes, amazon and
all major digital stores .
You can click the link to download now
All eleven songs was produced by xteembeatz , mixed by levi dasaved ,remixed and masteted by Okwy Umeh.
ALBUM TRACKS
#1  Anointed Senators
#2  Idi Mu Mma
#3  Chukwu Bu Ike
#4  Osinachi
#5  I’m in Love
#6  Godiya
#7  You Be God
#8  Onye Di Ka Gi
#9  Better Days  https://my.notjustok.com/track/download/id/174382
#10  Dust We Are
#11  Great You Are
https://spinlet.com/music-and-genre-album/301720
https://itunes.apple.com/us/album/the-origin/id1288969896?ign-mpt=uo%3D4
https://play.google.com/store/search?q=The%20Origin%20Vic%20Mathias&c=music
https://www.amazon.com/s/ref=nb_sb_noss_2?url=search-alias%3Ddigital-music&field-keywords=The%20Origin%20Vic%20Mathias
http://www.deezer.com/us/album/48854422
https://music.yandex.ru/search?text=The%20Origin%20Vic%20Mathias
https://www.saavn.com/search/album/The%20Origin
https://zvooq.com/search/?query=The%20Origin%20Vic%20Mathias
https://www.shazam.com/search/The%20Origin%20Vic%20Mathias
ABOUT VIC MATHIAS
Victor Tobechukwu Mathias Okoli (born May 7,1994),Simply known as VIC Mathias is a young
Nigerian contemporary Christian singer-songwriter and recording artist from Nnewi south,
Anambra State.
Many
calls him the man with a female voice because of his pitch. He is the
founder of a music group called Exceptional Music International , which
is home to young worshipers and recording artists such as Vic Mathias
himself, kellypraiz(singer),vic flames and xteembeatz (producer) among
others.
Vic
Mathias recorded his first song  titled “Great you are”  in 2015 and
now in 2017, he is out with this beautiful one he titled ”Better Days”
Produced by Xteembeatz.