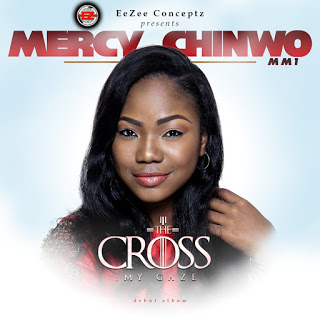 From the stables of EeZee Conceptz Nig. Ltd comes the release of the debut album – THE CROSS MY GAZE by Gospel music sensation Mercy Chinwo.
On the 10th of February, 2018, while building anticipation for the release album, EeZee Concept released yet another single off the new album by Mercy Chinwo titled “Love Expression” which was apt for the Valentine season. She

has also serenaded the airwaves with hit songs like “Igwe”, “Excess Love”, “On a Regular”, “Omekannaya” but the album offers a total expression of Mercy Chinwo’s craft and worship to the great God.

THE CROSS MY GAZE reveals the versatility of the graced Gospel music diva as she expresses her heart of worship in various genres, with an aim of bringing us to the knowledge of God, making us aware of his sovereignty and thereby, joining Mercy to honour God with the tracks on the album. . The theme of the songs in this album is kingdom driven as they are direct revelation of the Spirit of God.
Credits on the album includes collaboration withChris Morgan, Fiokee, Olaitan Idoko and Shady B. Production credits include Dr. Roy, EeZee Tee, Ebenezer, A4 and Dplus. It is available on all online stores and retail stores close to you.
EeZee Conceptz held a Gospel street concert tagged“Gospel Street Combat” at Mile 1 Park, Port Harcourt, on the 20th of February in order to launch the new album. The concert was also used to commemorate the release of Gospel music ministerPreye Odede‘s “Ready” album released in December of 2017. The concert also featured Gospel personalities including Shady B, David Desai, Tonniel Avu, Toby, Prospa Ochimana and KO Baba.
Join the worship with Mercy Chinwo.
Get the album below: HERE

Music – Min. Joshua Bassey – The Glory of my Life -@Sacredmi

(New Music) YOU By Rosemary|| @Tonysroz