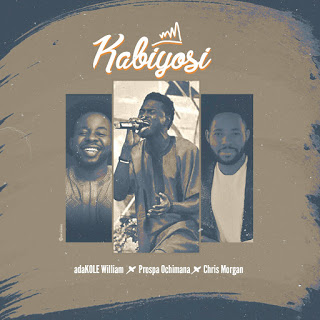 Barely a month after Miraclously surviving five bullet wounds, after being attacked and sporadically shot at, Psalmist Adakole William releases ‘KABIYOSI’ a song of worship and reverence to Yahweh Adonai, the Supreme King, Ruler and Creator of all creation.In his words ”Every opportunity to worship, is an opportunity to live God’s (The Creators) dream for His creation” adaKole william is a Nigerian born again singer, songwriter, producer, Minister and Believer in the Gospel of Jesus Christ, from Otukpo local government, Benue State. Kole started playing drums at age 6, and the Keyboard at 8 and has never looked back on music from then till now, serving God in various capacities, in various Christian music groups and choirs over the years.DOWNLOAD HERE

With a rare song writing anointing, Kole has over four hundred (400) songs written, over one hundred and fifty (150) songs recorded, to the Glory of God, and has two (2) albums released. Highly lifted (2013) and Yahweh Adonai (2016), and has had the the humble privilege of leading Gods people in worship across Nigeria, South Africa and Europe. Kole is the CEO i4HP GLOBAL SERVICES (RC1184605, with interests in Corporate branding, transport, logistics services and real estate. Kole has a B.Sc Geography, from the Benue State University, class of 2007, and is currently running a Post graduate study in Peace studies and conflict resolution.Kole is solely committed to proclaiming the message of Jesus Christ, the Lamb of God, slain for the redemption and salvation of mankind, from Nigeria to the ends of the earth. Kole can be followed on facebook, Twitter and instagram @adakolewilliam.