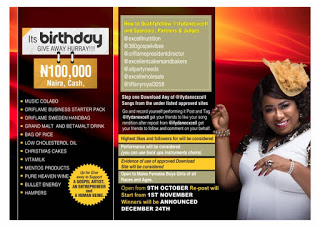 Amazing Gospel music minister Ify Dan Excell in celebration of her birthday, is giving out a whooping sum of #100,000 and a lot of freebies to a Gospel Artist and An Enterpreneur.

How To Qualify
Follow @Benmagradio, @Ifydanexcell,@360gospelvibes, @excellnutrition,@oriflamepresidentdirector,@allpartyneeds @tiffanyroyalbakes@excellentcakersandbakers@excellwholesale on instagram,
2. Download any of Ify Dan Excellsongs from the under-listed Digital Platforms below
Boomplay || iTunes || Apple Music|| Amazon Music || Spotify ||Deezer || Napster || Tidal ||Akazoo || Line Music || iHeartRadio|| Yandex || CD Baby ||MtnMusicPlus || Cloud 9 || Glo
3. Record yourself Singing and miming the song,
4. Tag @ifydanexcell and @360Gospelvibes on Instagram
5. Invite your friends and families to like and comment to your rendition on @ifydanexcell and @360gospelvibes instagram pages
6. The Video with the Highest likes and comments would be considered
7. Performances would also be considered ( You can Use back up instruments and choirs)
8. Evidence of use of Approved Download sites would be seriously considered.
9. This opportunity is opened to both Males, Females, Boys  and Girls of all Ages and Race.
FREEBIES INCLUDES:
i)  Music Collaboration
ii) Oriflame Business Starter Pack
iii) Oriflame Sweden Hand Bag
iv) Grand Malt and Beta Drinks
v) Bag of Rice
vi) Low Cholesterol Oil
vii) Christmas Cakes
viii) Vitamilk
ix) Mentos Product
x) Pure Heaven Wine
xii) Energy Drinks
xiii) Hampers
The Challenge opens from 9th October, Re-post will start from 1st November, while winners would be announced on the 24th of December 2018.
About Ify Dan Excell
Ifeoma Dan Nwude (Nee Okafor) is a Nutritionist, Dietitian, the MD Excell Nutrition and Diet Therapy Services NIG and DMD Excell Services Nig.
She has served as a music minister in various capacities. She was the lead vocalist for her secondary school choir and went further to release an album with them.
She joined the Campus Fellowship of Christian Students (FCS) “God’s Base of Operation” while she was studying Nutrition and Dietetics in Kaduna Polytechnic.
She also released an album with the team titled “In His Presence.”
As the pioneer Choir Leader for her church, Living Faith Church World Wide, Agip Ada George, Port Harcourt, she has been instrumental at various level, also in the youth fellowship choir.
Together with the choir of the Living Faith Church, she released yet another album titled “My Time.”
Ify Dan Excell is also an author, after serving at University of Port Harcourt Teaching Hospital (UPTH) Dietetics Department at the end of her service year, she wrote and launched a book “Complimentary Foods for Infants from Six Months of Age.”
She has hosted many Nutrition Programmes and given several health talks in companies, Schools, Churches and on Television.