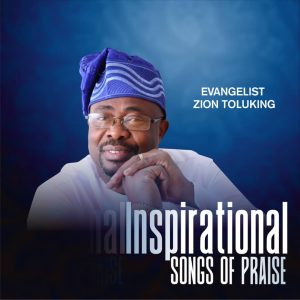 Evangelist Zion Toluking has released his new studio album titled ‘Inspirational Songs of Praise’. The album is a compilation of self-composed praise and worship songs.

The Ireland-based Nigerian gospel singer, sound engineer, and music producer says the 4-track album is an Inspiration from his love to praise God always.

The album is available on digital stores worldwide, and can be downloaded using the link below:

Zion-Toluking was born and raised in Nigeria, he started his music career at age twelve by joining a gospel band, and was also a member of his church choir. Because of his special gifts in playing music, he played with few bands and later formed a band called CDS – Christ Disciples Singer in 1994.

He trained as a sound engineer and music producer, really happy and enjoyed playing music, He relocated to Ireland playing music in many places, and won Best Male African Gospel Artist in 2011.

He official formed a gospel music band in Ireland in the year 2000, the aim of this band is to propagate the Gospel of our LORD JESUS all over the world and to reach out to lost souls. Zion Toluking also plays in concert, church ministration, and live band in Christian parties.

Talking about his new album, he says:

Praising God always open doors of miracle and deliverance to His people – Psalm 22:3. The Lord inhabits praise the of His people. God gives peace and rest when we praise Him for He’s worthy to be praised. This is an inspiration for me loving to praise God.