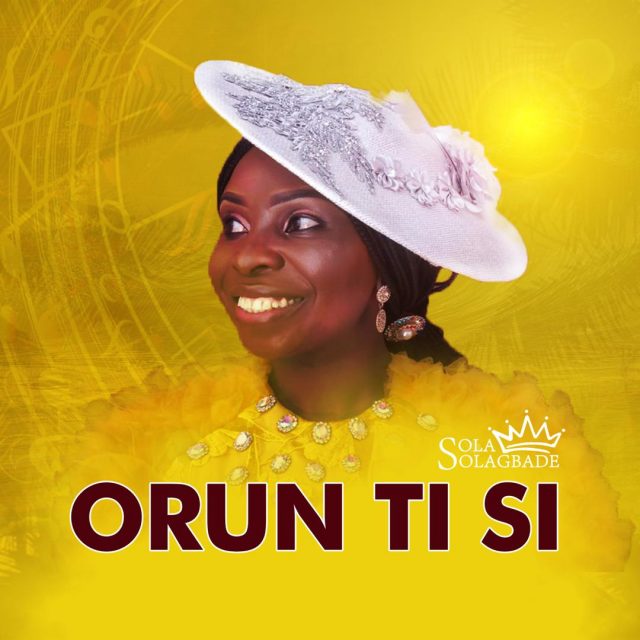 The Yoruba titled Album “Orun Ti Si” which translates as “Heavens Open” in English, comprises of 8 powerful songs all produced and mixed by Peter Abiola at Alpha-P Studios.

While sharing the inspiration behind the album “Orun Ti Si”, Sola Solagbade says, “the Album is a message for me and I’m sharing it with the world. Things are getting better henceforth, it’s the season of open doors and great turnaround. It’s my 7th Album, it’s the season of perfection and a new beginning. This is the reason I Stuck with the title of the song as the title of the Album. For me and as many that believe “The Heavens Are Open,” “Orun Ti Si,” the Heavens are open over you in Jesus name.”

As a songwriter, Solagbage knows that writing from her heart brings healing to the sick, hope to the hopeless, and strength to the faith of the listeners. That’s why her songs cut across all borders and nations.

Being regarded as one of the best rising Nigerian Gospel artistes, Solagbade had the privilege to share the stage with Gospel top singers as Nathaniel Bassey, Pat Uwaje-King, Eben, King Sunny Ade, Efe Nathan, Tim Godfrey, Kunle Ajayi, Bukola Bekes, and RCCG Praise Team at the Marathon Messiah’s Praise, a yearly event of long hours of praise and worship in honour of Pastor E.A. Adeboye birthday celebration at the RCCG Redemption Camp since 2015.

Sola Solagbade is also the founder of Solacrown and the Royals Help Foundation, with a mission to go into prisons, rehabs and orphanages to organize praise and worship concert, also support them with foods, clothing, gift items and counselling.

She also the Convener of Nigerians Arise for Nigeria, a 30days international online prayers program for Nigeria, led by Nigerian Ministry Overseers both home and in the diaspora.