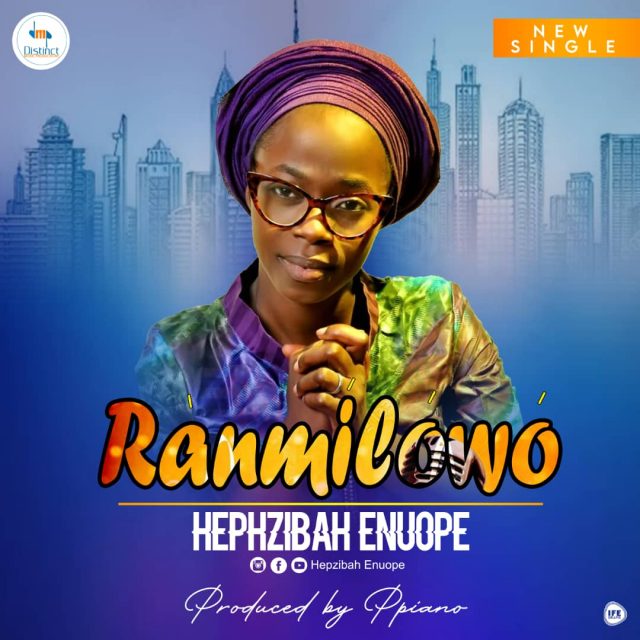 German-born Gospel Artiste Hephzibah Oluwabunmi Oladejo  popularly known as Hephzibah Enuope has release another New Single Track titled RANMILOWO from her forth coming Album.
“RANMILOWO is a pure message that reveals one’s stand with the Lord. It’s either you’re in or out, cold or hot. No two ways about it. Mark 8:36-37 says;What shall it profit a man if he shall gain the whole world, and lose his own soul. Or what shall a man give in exchange for his soul? This track is set to bless the Universe and expand the God’s Kingdom. RANMILOWO was beautifully and distinctly produced by the legendary Ppiano”
DOWNLOAD, LISTEN & SHARE
click on download mp3 below to download this song.

ABOUT ARTISTE
Hephzibah Oluwabunmi Oladejo was born in Stuttgart in Western Germany into the Family of Pastor & Prophetess A. L Alabi. She hails from Ikere Ekiti, Nigeria.
She graduated from Tai-Solarin University of Education, Ijagun, Ogun State where she obtained her B.sc Ed in Social Studies and graduated with a second class Upper honour in the year 2011.
Hephzibah Oluwabunmi Oladejo popularly known as Hephzibah Enuope‘ started singing at a tender age and has since developed a great passion for music, and constantly preaching messages of salvation and victory through her songs. I believe in pure worship and raising an altar of praises to YAHWEH. Hephzibah Enuope is happily married to Evangelist Olamilekan Oladejo and has a great son.
She has Two Musical Albums and one single track to her credit.
The First Album titled *Your Majesty* was officially Launched in 2014,
The second Album titled Enu-Ope which birthed the name ‘Hephzibah Enuope’ was officially launched on her Wedding Day in 2015.
Her 1st single track titled Wonder Working God which was nominated for an award by BEGOME and AGMA was released in July, 2019.