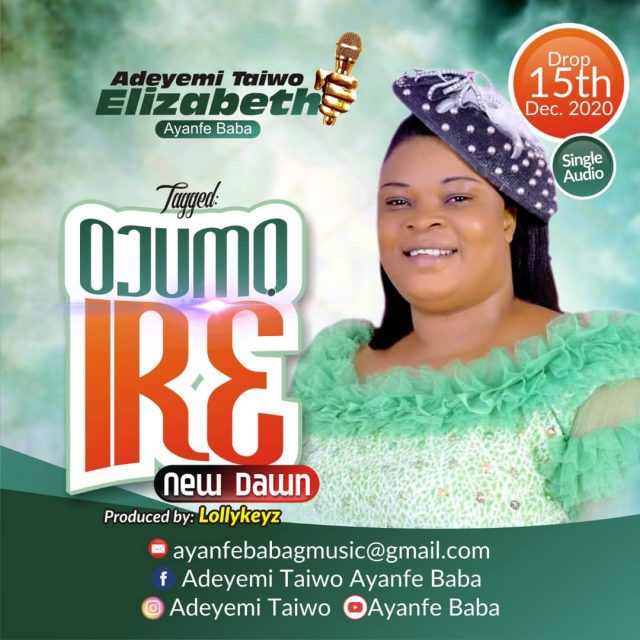 Evangelist Adeyemi Taiwo popularly known as Ayanfe Baba has released a new inspirational song tittle  Ojumo Ire to spice up your early morning spiritual and daily activities. this vibes is promising to awakening your inner man to bless God for a daily Good Morning. The vibes is proudly produced by the versatile producer Lollykeyz
DOWNLOAD, LISTEN, SHARE WITH FRIENDS & FAMILY
click on download mp3 below to download this song.

GET SONG ON AUDIOMACK HERE
ABOUT ARTISTE
Evang. Adeyemi Taiwo Elizabeth popularly known as Ayanfe Baba, born on August 20th into the family of late Elder and Dns Kolade Titus Iyadunni( Baba Eleyin) of Odonburo’s compound Ede, Osun State.
A graduate of Business Administration from Federal Polytechnic Offa in 2004. Singing is a talent from God and to the glory of God she has  been singing since she  was in primary school.
She  launched her band “Ara Olorun Gospel Singers” in 1998 at Ede. She  also got married to Gospel Minister Evang Adeyemi Sunday Joy in 2007 and  are both blessed with children. The duo gospel music minister  agreed to have one band and it was launched in 2008 called “Anointed Voices Gospel Singers”. And her husband made her the vocal leader of the ministry and started supporting her since then. God gave them instruction to celebrate His faithfulness every October and we adhere to it, that’s why they do annual concert on October and every year of the celebration recorded huge testimonies.
She got her  inspiration through the leading of Holy Spirit, from the Bible and God do minister to her anytime,  the main reason why Evang Adeyemi  don’t always joke with voice record phone. She has to her criedt so many single and Albums produced : 1. Lord you are so good (CD ) 2. Ayanfe ni mi (Vcd) 3. My Praise ( CD ) 4. Bami se ( single track).
By the grace of God she will be launching three(3) albums on 26th April, 2020 in Osogbo by 12 pm at C.A.C Winners District Behind Jaye Filling Station Osogbo. Glory be to God for using me as vessel unto His honor.

I Need You By Hilary Eju