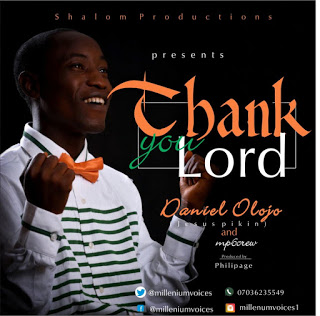 The song
Thank You Lord came spontaneously as I exited the bathroom few days to my
birthday,5th July in 2015. I murmured the Phrase at first until the
lord told me to worship him with it at the birthday thanksgiving get together.
During the get-together, the word of the Lord came that the song should be
recorded and released to nations for worship unto Him.
The song is
borne out of God’s unimaginable love to mankind by sending Christ for
redemption. It is also a reflection of how God made us something out of nothing
even when we never deserved it.
Thank You
Lord!
DOWNLOAD HERE

Daniel
Olatunji Olojo (a.k.a. Jesus pikin) is the leader of Millenium Praise Voices
International, a registered music organization also known as mp6 crew. He is a
passionate worship and praise leader who has coordinated diverse choir teams and
composed hundreds of songs for ministrations.
He is the
convener of Sweetest worship which began in osogbo in April 2015 and spreading
to other parts of the world as God has mandated that we should WASH (Worship
And See Happenings)
He hails from
ilesa in Osun State.