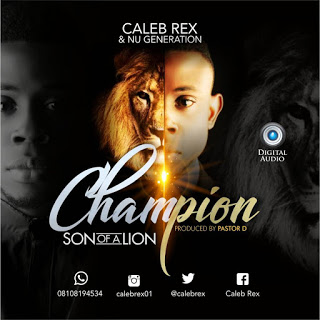 Anointed and Multi-talented Gospel artist, Caleb Rex, is out with his third single titled Champion.
Caleb Rex has released two initial singles which broke fearlessly into the gospel scene in 2016 comes out his third single titled Champion which would get you into fastening your seat belt, getting your headset on, and having the replay button set as you listen to this song.
“Champion” is an uplifting message that encourages everyone in knowing that no matter how down you may have been in life, you’re a winner already, you’re more than a conqueror and You will not just survive through life, you will also thrive! Keep your head high!
Keep on declaring, I’m the son of a lion, I’m the child of a king, I can never loose.
Get to add this song on your playlist!!!!!
DOWNLOAD HERE