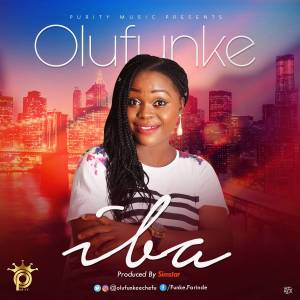 Fast rising Gospel Artiste Olufunke is out with a new single titled Iba. Olufunke who had previously released wonderful songs since she debut in the Gospel music industry with Overflowing Praise followed by If you know me before  which was released in 2016.
IBA by Olufunke is a beautifully crafted fusion of the tradition Yoruba dance and rock music. It is a song of deep and intense worship to the King of kings and to Him Who sits on the throne, JESUS CHRIST.  It’s a song you’ll love to listen to over and over again as it has the capacity to bring one quickly into a worship mode.
DOWNLOAD HERE

ABOUT OLUFUNKE
OLUFUNKE started out quite early in life with her music ministry from her teenage years where she was very active in the teen choir. She later joined the main church choir in one of the Rccg parishes in Lagos where she distinguished herself as a worship leader. In 2010, she officially launched a music group known then as the MUSIC ‘N’ LIFE BAND which got several invitations to minister in several programs and events within Lagos. In addition to this single track, she is currently working on her debut album titled THE UNVEILED PROJECT with some of the tracks nearing completion.
She attended Vetland Grammar School Oko Oba Agege before proceeding to the Polytechnic Ibadan where she bagged a degree in Mass Communication. She is a trained broadcaster and media executive having attended several training in this regard and has worked in several places in various capacities.
She is married to a pastor and her music instructor Chinedum Echefu fondly called PASTOR CJ by friends and followers and they are blessed with a beautiful daughter.

Minister Dave-Contrite Commemorates Easter With ‘Ya Kare’ [It Is Finished] (+Lyrics) || @DaveContrite Cc...